The Dress Says It All

The invited artists were asked to create a two or three-dimensional work that spoke to this theme, and accompany their work with a narrative written in the first-person voice of the artwork, in which the artwork speaks of its own feelings, thoughts and origin.

.
Thanks to Helen Heibert for including The Dress Says It All in her on-line Sunday Paper.

Click to purchase the catalog.
Curated by the inspired Denise Stewart, ﻿﻿The Dress Says It All ﻿op﻿ens at BAYarts
in the Sullivan Family Gallery and runs through August 2nd, 2013.
Reception:   Friday July 5th, 2013 from 7:00 to 9:00 pm


The idea that artifacts can speak for themselves is a familiar enough literary trope, and one that I believe is a fresh angle in the conventional visual arts scene. The concept for this show materialized after devouring Erin McKean's poignant first novel, The Secret Lives of Dresses. (If only whoever borrowed it would send it back.)

(You hyphasmatophiles* might enjoy Erin's blog, A Dress A Day.)  Thanks, for an excellent read which reminded me of my own dear grandmother and the bulky old sweater she left behind that smelled like her until I forgot and washed it. (Sigh!)

Unlike Erin the Diva —and I say that in all sincerity— I know just little enough about sewing to really hurt myself. My relationship with pins and needles is fraught with pain and needless anxiety, yet for some counter-intuitive reason I've managed to acquire a fabric stash big enough to fill a school bus. (Can you see the yellow mid-line bulge?)

Having tons of fiber around is less about a need to feed fabrics through my chunky thimbled fingers and more about inspiration from their color, pattern and texture. About the only sewing I do is to make carrying bags which my friends —who also make incredible lap quilts— and I donate to Ronald McDonald House. (Your fabric scraps are welcomed.)  But I digress.

Accepting The Dress Says It All's challenge was not about sewing. It was about marrying a primal need to immerse myself in the tactile sensuality of a three dimensional art form, with the perverse delight I take in the rhetorical push-pull and manipulation of language.

When I first thought about what I'd create for this show, the only thing that was certain was that I intended to work in three dimensions. I believed people would think me earth conscious and generally thoughtful if I could recycle materials.  I wanted to use familiar items in a surprising way, and desired the result to be a big enough departure from the usual and customary that people would stand up and take notice.  In short, I wanted a "wow."

So with absolutely no idea where I was going to wind up, I woke one morning and walked to the kitchen to make a pot of coffee and begin the process.

Outside, the clouds parted.  I held my breath.  It felt like it was going to be one of those moments.

The light grew brighter.   Colors intensified and my vision sharpened.  That silly choir in my brain chanted imponderables just out of earshot.  I cocked my head to better hear the words.

And just like that!  There it was: the means to an end.  THE plan!

Wonky, but a plan nonetheless.  Sometimes a girl just has to listen to that inner voice and take a chance.

I threw caution to the wind and the used filter from the coffee pot followed close behind.

Yes. That's right.  I launched that soggy baby straightaway across the room, and watched it cut a comforting arc as it skirted disaster.  Sailing adroitly over the stove, it barely missed the cat, and landed in the sink.

It hit the mark with a satisfying sploosch, slid to the drain and emptied itself in a glorious, grainy sluice.  All that remained of yesterday's joe now, were heartburn and a happy ending.

Oh, and that stained coffee filter.

And there my friends, is the inspiration!  I'm going to build a wedding dress with used coffee filters.  (Hold the donations please.)
* Homespun coinage from Greek hyphasma, -atos, "cloth" plus philos, "friend, lover (of —)."
The process began here. 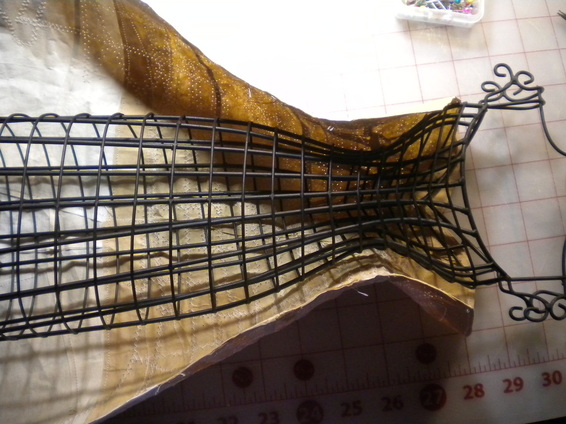 What follows, is the essay in which the dress tells its own story.  Writing this was just as much fun as creating the dress itself.

Pulp Fiction
The dress speaks for itself...

Why, heavens-to-Betsy.  I’m as pretty as moss on the magnolias in May.

Granddaddy told me that I’d be barely grown when I left.  The world beyond our plantation was waiting to transform a scrawny sapling into a miracle of modernity. When I had doubts, he’d lean in and remind me that I was a chip off the old block that nobody would recognize when I returned.

Leaving was hard, but sometimes you don’t get a choice.  I was going to miss home and its friendly shadows.  We had always stood together, and now granddaddy would stand alone.  Being cut off from your roots is a challenge for everyone.

Months passed in a blur.  I knew I could never go back to being what I was.  That same insensate progress that cut me down in my prime, crushed me in its mechanical jaws and spat me out in a form so foreign that I couldn’t understand why man was labeling me earth-friendly.

As I live and breathe, how could anything be more earth-friendly than a tree?  What has become of me?  Why have they done this?  Where are my beautiful leaves?

Timberrr! One moment I was planted on solid ground worrying about Granddad weathering storms alone and in a thundering crash I’m here, pieces of me lingering on the plantation’s veranda, tucked into a steaming silver pot, feeling the drip of coffee filtering through my folds!

And there on the side table is the box I arrived in.  Inside, the rest of my self sleeps in the darkness.

Dear Mistress Ann hums softly, coaxing my boxed remains from their #4 cone coffin, carefully pleating some of me, crumpling other parts and turning the rest into thumb-sized flowers.  Soon, a pattern is established: pleat, crumple, rose, pleat and suddenly, what’s left of me is fighting to get out of the box because it all wants to be roses.

Girls will be girls.

The wonder is that I happened at all: that such a delicate fiction of a rose has evolved to stand in the shade of her granddaddy.  The real miracle is, he’d recognize me anywhere.

I am an oak, oxygen, life and a dress whose altered state fills this moment.  Pinned upon its breast, I am a rose: the lasting presence of a grandfather whose long shadows beckon across the meadow of time where his presence lingers still.

Leslie Edwards Humez ©2013
clevelandartseast@earthlink.net
Epilogue
I'm reminded of the words Leslie Mitchell used to inaugurate the first television broadcast August 26, 1936.   "Good afternoon, ladies and gentlemen. It is with great pleasure that I introduce you to the magic of television."

The difference, of course, between then and now is that this blog is brought to you by an electronic variation wherein I'm the producer, director, screenwriter and all the actors in one, a lot of hats, which has the disadvantage of having no-one to pass the buck to.

The upside is that tv and the internet are miracles of the mind that transform one sort of energy into another: magical cauldrons upon which we rely that have a value exceeding the sum of their parts.  They are the media in which we mix and re-mix dreams. Here we have the freedom to be our own bosses...wizards of ideas and inclinations.

The mind of this artist works that way. With me, it's chain-of-consciousness and wordplay in a marriage that manifests itself in three-dimensional visual fantasies.

So what do you get if you put together hot glue, a few stitches and a couple of hundred used #4 coffee filters?  Bibbidi-bobbedi-boo!  You get that happy ending and a wedding dress!

And remember this: the magic is inside us all!


(Visit the Nesting Place to see what lovely things others are doing with coffee filters.)