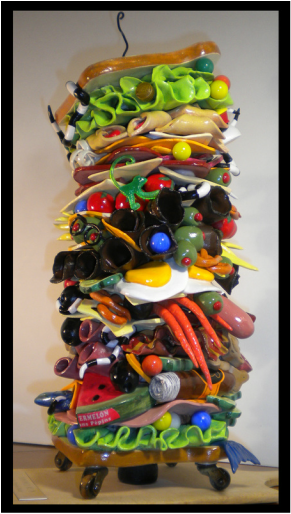 Once named Gluttony, this work has become my signature piece.  During its original exhibition in the Akron Arts Prize 2013 competition, it was called Sandwich Me In and has since been exhibited at various venues including The Salmagundi Club in Manhattan.

People who I meet say, "Oh! You're the sandwich lady!" I couldn't be more excited by public response.

Feed me, or as the Dalai Lama might say,
Make Me One With Everything ©2013 is the play on words by which it was advertised in 2014 and has since come to be known.  (See Susie Frazier's 78th Street Artist catalog, below.)

This work was influenced by the appetite of Chic Young's cartoon character, Dagwood, and was created with input from readers who suggested many of the included components. The octopus -this time wearing black and white checks- is a familiar inclusion in my work.

Make Me One With Everything©2013 is archived and has been continually on display to the public at Gallery Plus, #109 at 78th Street Studios, Cleveland since the gallery opened in October of 2014.

And just think. It all began with that little blue fish.
.

I'm always blown away by the attention this receives from viewers of all ages including my friend, Gary Dumm, one of the amazing cartoonists who contributed to Harvey Pekar's now iconic Cleveland comic, American Splendor.

Above is a March '16 pic of Gary clowning around.  Photo by Earthman, courtesy of the patternist artist Laura Dumm.